How to get to Temple Street Night Market

Being near the centre of Kowloon, located midway between Jordan and Yau Ma Tei MTR stations, the market is very accessable by public transport.  However as this is a night market do be aware that when leaving the market very late at night some forms of transport will be closed.

The last MTR train to leave the nearby Jordan MTR Station is at 00:52am.  While normal routes such as 112 stop at 00:30am.  However there are night buses such as the N122 which run throughout the night.

Here are the directions to Temple Street Night Market from some common locations.

Go into the MTR at Tsim Shau Tsui MTR station or which ever is closest, then take the Kwun Tong line northwards towards Kwun Tong, leave the train system at Jordan Station.

Inside the station read the signs for exit A - this is the closest exit to the Temple Street Night Market. The exit uses steps so is not wheelchair friendly.

Once leaving the MTR Station at Exit A you will find yourself on Jordan Road, near the corner with Nathan Road.  Turn to the right and walk along Jordan Road for 3 blocks. The entrance to Temple Street is well marked with a large red Chinese gateway.

Any tourist or visitor to Hong Kong will go to Causeway Bay, it is one of the centres of all interesting things to see in the region with great shopping and dining locations.  To go from there to Temple Street is simple.

Hong Kong has an excellent modern bus system, and taking a bus from the Causeway Bay shopping district  is simple, but does involve some walking as none of the routes from Causeway Bay stop very close to Temple Street.  The easiest option is bus 112 which can be caught in Causeway Bay or North Point.  It stops outside the Hong Kong Central Library, just beside Victoria Park, and you can also catch it in Yee Wo Street beside the Jardines Bazaar Street Market.

Finally before crossing the harbour there is a stop for this bus under the flyover behind Times Square in Canal Road.  Whichever stop you get on the bus you need only stay on for a few stops as after crossing the harbour via the Crossharbour Tunnel it is the very next stop you should get off at.  This is labeled Diocesan Girls' School for the famed school located nearby.

Continue along Gascoigne Road past the Eaton Hotel and turn left into Nathan Road and go directly across Nathan Road into Kansu Street, which you can follow until it takes you to the end of Temple Street on your left, which you will recognize from the large Chinese Gateway.

If it is past 8:30PM consider instead staying to the right and passing under the Flyover which is to the right of the carpark building, and going directly into the Cantonese Opera Singing area.

Catch the MTR on the Island line from any station in Causeway Bay or North point and take the Island line towards Central, but at Admiralty MTR station change trains.  many people change here so when the train car suddenly becomes empty, and you are on station with blue tiles, you'll know it is the right one.

Change to the opposite platform and continue on the Kwun Tong line as for the MTR instructions above.

Have an evening layover in Chep Lap Kok airport and want to enjoy some authentic Hong Kong street shopping and dining? Then a trip from the airport to the Night Market might be right for you.

Take the Airport Express train, which has a platform inside the airport building just part the arrivals hall, and alight at the Tsing Yi station.  There change trains to the Tsuen Wan Line going south towards Central but get off the train when it arrives at Jordan MTR Station.

Leave the station via exit A.  When you reach street level turn right and walk along Jordan Road for 3 blocks until you reach Temple Street.

Try the A22 Airport CityFlyer bus which leaves from outside the airport at the ground transpiration centre and goes all the way into Kowloon.  You'll want to get off at the Shanghai Street stop outside Jordan Mansion, then walk along in the same direction for two blocks to the entrance to Temple Street.

The A21 bus would also work, but takes longer and puts you down at Nathan Hotel stop. You then have to cross the Nathan Road and go down Saigon Street until it intersects with the Night Market, about two blocks.

Vibrant sight by day and night 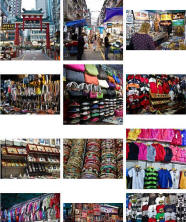 See Gallery
Get to the Night Market

Visitors and locals alike congregate in the evenings in Hong Kong's last remaining Night Market. The Night Market at Temple Street has been a fixture of the Jordan/Yau Ma Tei district since at least the 1920s and probably before.

Today it boasts market stalls with fashions and accessories, seafood and claypot rice in traditional Dai Pai Dong restaurants, fortunetellers and tarot card readers, and Cantonese Opera singers. Nowhere else in Hong Kong is such an interesting cross section of Hong Kong culture, cuisine, commerce and society to be found.